More than a decade ago, noted historian Jim Horton was commenting about the meaning of the Underground Railroad, and he said something close to the following:

“If people back then would help others, not even knowing who they were and at risk to their own lives, what excuse do we have for not working together today?”

That powerful statement has motivated me from the day I heard it. It lies at the heart of my commitment to tell the story of the Underground Railroad and other stories like it which demonstrate man’s humanity and one’s willingness to help another notwithstanding the personal risk involved.

I was recently reminded of this as I read a remarkable diary of a woman named Iris Origo who lived in the Tuscan countryside during the height of World War II.* The German Nazi Army was in control of the surrounding land, yet there were allied prisoners of war who had escaped from Nazi internment camps and others who had become detached from their units.

This diary includes many remarkable stories which bring to life the same values of courage, cooperation and perseverance which undergird the story of the Underground Railroad. They are yet another example of why stories like those of the Underground Railroad can provide inspiration on how we can live at our best today by helping others who need our help no matter where we live.

Iris Origo owned an estate not far from Florence. She, along with other partisans were risking their lives rescuing escaped allied prisoners of war and other allied soldiers who had been detached from their units. I love the way she explained the motivation of those who were helping these soldiers. It reminded me of what motivated the heroes of the Underground Railroad.

“What, it may be asked,” she wrote, “was the motive underlying the generous help given to the hunted Allied prisoners of war by the Italian countryfolk, often at the risk of their own lives? It would be a mistake, I think, to attribute it to any political – or even patriotic – motive. There was, it is true, a certain amount of anti-German and anti-Fascist feeling, especially among those peasants whose sons had been in the army against their will. But the true motive was a far simpler one. It has been described by an Italian partisan as ‘the simplest of all ties between one man and another; the tie that arises between the man who asks for what he needs and the man who comes to his aid as best he can. No unnecessary emotion or pose.’”

An English officer, himself an escaped prisoner of war, who owed his life to the help given him in this manner, expressed views in almost identical words: “The peasants’ native sympathy with the under-dog and the outcast asserted itself. Simple Christianity impelled them to befriend those complete strangers, feed them, clothe them and help them on their way. All over Italy this miracle was to be seen: the simple dignity of humble people who saw in the escaped prisoners not representatives of a power to be withstood or placated but individuals in need of their help.”

This example was repeated many times:

Of the 70,000 Allied POWs at large in Italy on September 8th, 1943, nearly half escaped either by crossing the frontier to Switzerland or France or eventually rejoining their own troops in Italy. Each one of these escapes implies the complicity of a long chain of humble, courageous helpers throughout the length of the country.

“I can only say,” wrote General O’Connor to Iris Origo, “that the Italian peasants and others behind the line were magnificent. They could not have done more for us. They hid us, escorted us, gave us money, clothes and food – all the time taking tremendous risks…We English owe a great debt of gratitude to those Italians whose help alone made it possible for us to live and, finally, to escape.”

Iris Origo concluded with these words:

“It will, I think, be obvious that I love Italy and its people. But I have become chary of generalizations about countries and nations; I believe in individuals and in the relationship of individuals to one another. When I look back upon these years of tension and expectation, of destruction and sorrow, it is individual acts of kindness, courage or faith that illuminate them; it is in them that I trust. I remember a British prisoner of war in the Val d’Orcia helping the peasant’s wife to draw water from the well with a ragged, beaming small child at his heels. I remember the peasant’s wife mending his socks, knitting him a sweater and baking her best cake for him, in tears, on the day of his departure.”

There were other heroes who reached out to save the lives of others. One of them was the Archbishop of Florence, Cardinal della Costa. When some of his nuns were arrested because they had given shelter to some Jewish women in their convent, he went straight to the German Command.

“I have come to you,” he said, “because I believe you, as soldiers, to be people who recognize authority and hierarchy – and who do not make subordinates responsible for merely carrying out orders. The order to give shelter to those unfortunate Jewish women was given by me. Therefore I request you to free the nuns, who have merely carried out orders, and to arrest me in their stead.”

“The German immediately gave orders for the nuns to be freed,” Ms. Origo writes, “but permitted himself to state his surprise that a man like the Cardinal should take under his protection such people as the Jews, the scum of Europe responsible for all the evils of the present day. The Cardinal did not enter upon the controversy. ‘I look upon them,’ he said, ‘merely as persecuted human beings; as such it is my Christian duty to help and defend them. One day,’ he gave himself the pleasure of adding, ‘perhaps not far off, you will be persecuted, and then I shall defend you.’”

Just as people reached out at the risk of their lives to help others during the era of the Underground Railroad and during World War II, so too can we reach out today to do all we can to identify, rescue and aid women, children and men entrapped in human trafficking and achieve the life they seek and deserve. 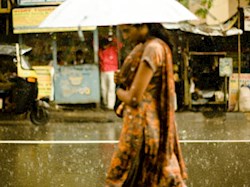 This year October 10th marks the beginning of Navratri, a Hindu Festival celebrating the triumph of good over evil.