Moldova is a small country surrounded by Romania and Ukraine. This former Soviet republic was known for its agricultural production, as the breadbasket of the USSR. Today, Moldova is regarded as the poorest country in Europe. Moldova is primarily a source country for victims of human trafficking, who are frequently forced to become sex workers in the Middle East.

A History of Occupation and Slave Trade

The region that is currently the Republic of Moldova has had a tumultuous history. For centuries, Moldova has experienced constant invasion and occupation by the Romans, Huns, Tatars, Ottomans, Mongols, Turks and Hungarians to name a few. Throughout hundreds of years of changing rule, human trafficking was regular practice. Captives from this region were carted to far off lands in Europe and the Middle East, bought and sold as sex and labor slaves. Girls from Eastern Europe have been coveted for their beauty and sold to Turkey in large-scale sex trades since the early 1800s. Moldova spent its more recent history controlled by neighboring Russia, and later, the Union of Soviet Socialist Republics (USSR). Until it declared independence in 1991, shifting identity and oppression have characterized Moldovan history and culture.

Trafficking in the USSR

During the era of the USSR, human trafficking by crime groups was low. However, human trafficking occurred on a massive scale at the hands of the state. In the 1940s and 1950s, more than 250,000 Moldovans were deported to labor camps in Siberia. The state simultaneously denied the existence of prostitution in the USSR and supported it. Prostitutes were granted special “yellow cards,” essentially a license to practice. Prostitution and sex slavery proliferated behind the Iron Curtain. Towards the end years of the USSR, prostitution and other deviant activities moved into the hands of large, organized crime groups. As the USSR neared social and economic collapse in its final years, human trafficking became an increasingly profitable enterprise. Widespread corruption did little to curb the rise in sexual exploitation of women from the Eastern Bloc.

After the collapse of the Soviet Union, hundreds of thousands of Moldovans were unemployed and desperate, making them vulnerable to exploitation. Many social programs that benefitted women were dismantled. The economic situation became precarious, and deep impoverishment hit the rural areas of Moldova. Political transition benefited the development of organized crime networks that were able to take advantage of the instability of the region. Trafficking in human beings was on the rise as crime groups capitalized on poverty, corruption and the disadvantaged position of women in society.

As human trafficking flourished, the state did little to protect its citizens. Corruption dominated society, and officials were easily paid off to look the other way, or even support trafficking activities. Orphanages became recruitment factories where girls in the most vulnerable positions in society were handed over to traffickers as they aged out of the system. By the mid-2000s, there was rampant corruption among senior government officials, police, boarder guards and judges (including the deputy director of the Center to Combat Trafficking in Persons) who were complicit in human trafficking. The very people who were supposed to be protecting Moldovans were using their power for personal gain in the recruitment, transport and exploitation of their own citizens. The government was slow to react, failing to investigate and prosecute these trafficking rings. Legislation has been slow to evolve, allowing recruiters to act with impunity.

Today, the average monthly salary in Moldova is only 230 USD. Few opportunities exist within the country, which has led to mass migration. More than a quarter of Moldova’s small population of four million live abroad, searching for better economic opportunities. Moldovans are desperate to get out, hopeful that they will find a more prosperous life elsewhere. This combination of desperation and hope leaves many young women susceptible to the false promises of recruiters who offer opportunities too good to be true in Europe and the Middle East.

It’s estimated that 1 in every 100 has been trafficked to date. Trafficking occurs both within the borders of Moldova and abroad, with the majority of victims being exploited in Russia, Turkey, Italy, Cyprus and the United Arab Emirates. Moldovan victims have been identified in more than 40 countries. Sex trafficking dominates the trade, but labor trafficking and forced begging are also common practice.

Many factors contribute to the proliferation of sex trafficking in Moldova. Today, almost all trafficking victims from Moldova leave on their own free will but don’t know the type of work they will be involved in. Eager to leave the country among the mass migration phenomenon, young women are open to greater risks; hopefulness makes them naïve to the dangers of trafficking. The prevalence of domestic violence in Moldovan culture is another motivating factor for women to take offers for work abroad in order to escape their abusers. 90% of victims of sexual exploitation from Moldova report that they had experienced violence at home prior to being trafficked. Traffickers can easily manipulate them given their desperation, often deceiving girls with the promise of love and prosperity in foreign lands. In the unlikely event that Moldovan victims escape and are repatriated, the risk of repeat trafficking is very high. Lack of opportunity and social support, stigmatization and severe poverty drives these women to again rally hope for prosperity anywhere else, even when they have experienced the risks firsthand.

Moldova is making strides at curbing human trafficking, but progress is slow. A crackdown on false study abroad and work-to-travel programs has limited one major recruitment method, though social media appears to have taken its place. National efforts are in place to educate communities on the risks of trafficking and the protection of victims upon repatriation. Traffickers are rarely prosecuted, and the convictions rarely result in prison time, so the risk remains low for networks of traffickers operating in Moldova. Further, Moldova is in a very precarious political situation, with an unstable government teetering between the east and the west, driving even more young people to seek jobs abroad.

Find out more about what is being done to prevent trafficking in Moldova by the National Committee for Combating Trafficking in Human Beings and ATIP Moldova. ATIP Moldova is an organization formed by U.S. Peace Corps volunteers who aim to prevent human trafficking by raising awareness, providing resources and encouraging action in rural areas. 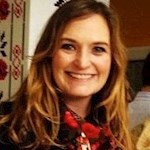 Kelsey Hoie Ferrell is a Peace Corps volunteer in Moldova and the Director of ATIP Moldova. She has a Master’s degree in Conflict Resolution from Portland State University. 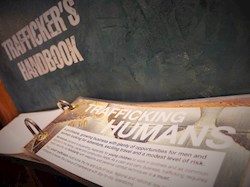