What's the difference between a product made by child labor and one made by a fairly paid adult? In the How It's Made series, we'll explore the conditions that slave-made goods are produced in and compare that to slavery-free operations. This week, take a look at the child and bonded laborers producing items for the carpet industry.

In pockets of rural India, children are locked in shacks and forced to work between 10 to 12 hours a day, six to seven days a week. Paid an average of $0.11 an hour, these children were sold to the trade in order to supplement their family’s income or to pay off inherited debt. The children who are now charged housing, food and miscellaneous fees rarely see any of the money they’ve made and may even build up debt of their own.

The adults in debt bondage don’t fare much better. Muslims earn about $0.20 an hour while Hindus of the lowest caste earn a measly $0.21 an hour. Depending on the Indian state, the stipulated hourly minimum wage should fall between $0.38 and $0.50. However, because these children and adults are heavily in debt, they cannot leave to find better-paying jobs. Guards at the shacks prevent them from leaving, and some workers are beaten for not producing the desired work output.

Siddharth Kara and a team of researchers describe the workers’ working environment: “…the working conditions uncovered were nothing short of subhuman. Factories and shacks were cramped, filthy, unbearably hot and humid, imperiled with stray electrical wires and rusty nails, filled with stagnant and dust-filled air and contaminated with grime and mold. Some sites were so filthy, pungent and dangerous that the researchers were afraid to enter due to the risk to their safety. Sometimes they pushed forward and endured the wretched conditions; other times they simply had to leave a site unexplored. Physical and verbal violence against the workers was all too common.”

In contrast, adult artisans creating hand knotted rugs for fair trade companies are often given all their raw materials and 50% of their earnings up front. They’re paid the other 50% as they’re making the rug.

These artisans get more creative freedom and often only work at the loom six hours a day, five days a week. To see the complete process, watch this video from Bunyaad.

An expert knotter can tie 40 knots per minute, and high quality rugs often have 512 knots per square inch. It would take four to five people working six hours a day nearly one year and two months to finish a 9 ft. x 12 ft. rug on a loom. Such a rug could retail for more than $7,000.

The fair trade alternative gives rug-weaving families the opportunity to profit from their craft, and they do so under fair working conditions. Furthermore, this economic activity empowers the women in the community, encourages men to work in their villages and keeps children in school.

Look for the GoodWeave mark 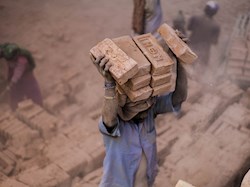