In the past 15 years, the topic about boys, girls and youth involved as combatants in illegal armed groups in Colombia has become more and more visible on the national public agenda. It has been brought up in conversations about management of the internal conflict and human rights, and now, more importantly, it has added to the peace talks in La Havana, Cuba.

The international community, along with the UN and both non-governmental and governmental institutions have worked tirelessly to demand armed groups to follow the numerous treaties and agreements, specifically the Optional Protocol on the Convention of the Rights of the Child approved on May 25, 2000. The Colombian Institute of Family Welfare (Instituto Colombiano de Bienestar Familiar or ICBF), is the governmental agency that is legally responsible for the rights and comprehensive protection of demobilized boys, girls and youth.

The term “child soldier” is not commonly used in Colombia; for professionals working in the field and making policies, these children are “boys, girls and adolescents demobilized from illegal armed groups.” UNICEF states on its website that the term “chid soldier” does not accurately reflect the range of roles in which boys and girls are recruited and used for military purposes. It also has to do with the fact that under the Colombian Law 782 of 2002, all persons under the age of 18 who were part of an irregular armed group are considered victims and have to be demobilized from the conflict in order to obtain the comprehensive protection the ICBF claims to provide.

The task of demobilizing and providing protection and restoration of basic rights is daunting and overwhelming to say the least. Out of the tens of thousands of children that are said to be involved in the armed conflict, 5,694 children have been taken into the ICBF’s Specialized Program of the Restoration of Rights of Demobilized Boys, Girls and Adolescents; over 6,000 out of the 25,805 adults that went through the Colombian Reintegration Agency (ACR) had been recruited as children; and over 900 cases have been reported by the General Prosecutor's Office. Out of all these, we can only count on the ICBF to provide the special care that children need. Unfortunately, those adults that were recruited as children do not get the necessary care and attention they require to overcome their traumas and sufferings because they are adults and are, therefore, outside the government’s target group.

Additionally, these numbers only reflect a portion of the work that is being done on this issue. It is important to point out that the ICBF has the right to contract non-profit entities to fulfill the objectives of the National Family Welfare Institute. These entities are supposed to achieve the same quality and fulfill the social function while being subjected to the ICBF’s objectives and care standards.

One of these entities is Taller de Vida, meaning “Workshop of Life” in Spanish. What began in 1994 as a group of women who would meet to discuss the violence they experienced as a result of the socio-political conflict in the country became an NGO that serves boys and girls that have left the conflict. Taller de Vida has its own intervention model and has even trained professionals from the ICBF in psychosocial processes. It currently works with schools with over 3,000 students; with 2,060 indigenous and Afro-Colombian children; and with an average of 80 boys, girls and adolescents demobilized from the armed conflict. Stella Duque ­– the executive director – expressed how much has been done since the inception of the organization and stated that “one of biggest challenges has been the topic of sexual violence because it requires a very complex intervention.”

Professionals like Stella have a pivotal role in the peace-making process to end the war. She is a leading voice among those demanding that the peace agreement in La Havana prioritize accountability and justice for survivors. It is people like her that give children the opportunity to change their situation, get reintegrated into society and thrive. An important figure in the fight for the rights of sexual violence victims, Stella does not leave other victimized children unattended. Here, she tells the story of a specific boy (given a fictional name) whom she worked with and who left a mark in her heart.

“His name is Carlos. He used to be part of the paramilitaries before he came to our center. I remember vividly one day when we were trying to do theater, we gave him a frame, and he stared at his face through the frame into the mirror. I don’t know what he saw, but he entered into a nervous breakdown. I had to hug him, hold him with a blanket and spend most of the morning holding him. He started opening up and sharing how he killed, what he saw and how much he experienced as a child combatant. Today, he is married with kids and now calls me every once in a while to catch up.”

Watch the video below for more information on Stella and Taller de Vida's work.

The example above is only one snapshot of the restoration story. When children have been stripped of their rights before, during and after conflicts, dedicated people who have the expertise needed to facilitate the reintegration process are necessary ­– not just for immediate aftercare services but also for long-term, trauma-centered care that acknowledge children’s specific lived experiences and agency.

Learn more about the work of Taller de Vida 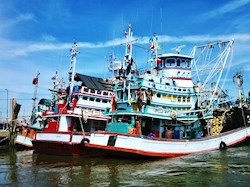 Volunteer at an Aftercare Shelter

Give back this holiday season by spending time volunteering at an after care shelter.