This Black History Month, we explored prison labor in the U.S. today, its ties to chattel slavery and arguments for or against the practice. This is part 4 and closes the series with why having a discussion on state-imposed forced labor in the United States matters.

In the 2014 Trafficking in Persons Report released by the U.S. Office to Monitor and Combat Trafficking in Persons, North Korea received the lowest ranking possible for failing to fully comply or make efforts to comply with the standards set by the TVPA. The third sentence within the country narrative reads, “The North Korean government subjects its nationals to forced labor in North Korean prison camps and through government-contracted labor in foreign countries.”

Those in state-imposed forced labor in North Korea are typically political prisoners who have not been charged with a crime or prosecuted, convicted or sentenced by a fair hearing. However, they are forced into some of the same activities, such as farming, that U.S. prison laborers must engage in.

More recently, the U.S. Congress passed the Trade Facilitation and Trade Enforcement Act of 2015 that closes a loophole in the Tariff Act of 1930. President Obama signed it into law, and the U.S. now prohibits the import of goods made by convict labor, forced labor or indentured labor.

It’s no secret that private companies profit from mass incarceration. Lobbying and campaign contributions by private corrections industries function to maintain pro-incarceration policies that keep more bodies in prisons. These actions and motivations come at a high cost to incarcerated individuals and their families, taxpayers and governments. Prisoners lose their freedom to a system no longer designed for rehabilitation, taxpayers end up paying to keep facilities running and state governments lose resources on a mechanism that does nothing to truly decrease crime.

Much in the same way that profits drive unfair trade policies that result in labor exploitation and forced labor, profits in the prison industry upkeep failing “tough on crime” laws that funnel more people into prison and prison labor programs.

Throughout detention centers in the United States, undocumented immigrants work jobs in the facilities while they wait for asylum and deportation hearings. Officially, these work programs are supposed to be voluntary, but there is a current lawsuit alleging that a group of immigrants in the Aurora Detention Center were forced to work under the threat of solitary confinement.

Note that detention centers aren’t prisons, detainees in them are not convicted criminals and that employing undocumented immigrants is illegal in the United States. As Carl Takei, an attorney with the ACLU National Prison Project, points out, "The government, which forbids everyone else from hiring people without documents, has effectively become the biggest employer of undocumented immigrants in the country."

Join the conversation about criminal justice reform, and check out The Marshall Project. 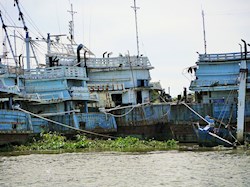