The history of the Democratic Republic of the Congo, the 18th largest country in the world, is fraught with violence, conflict and exploitation.

From the personal colony of King Leopold II of Belgium, to the dictator Joseph Mobutu's personal piggy bank, to a country divided by a twenty-year civil war, the DRC has a history of division and conflict. As a result, refugees from the DRC have fled all over the world. Gilbert Munda works with child soldiers, a particular type of enslaved person, in the DRC. Helping them to try and rebuild their lives, he tries to re-integrate them into society.

The Back-story: An Ugly History of Conflict and Bloodshed in the Democratic Republic of the Congo

In the 19th Century, as colonial fervor reached its peak, King Leopold II of Belgium gained personal control of what is now the country of the Democratic Republic of the Congo (DRC). It was given to him as part of the Berlin Conference of 1885, which divided up and formalized much of the colonial expansion that had occurred—paving the way for the tail-end of the so-called scramble for Africa. In one of history’s great ironies, an express humanitarian justification was given for the appropriation: the ending of slavery by Arab traders. Far from ending slavery, Leopold’s brutal reign institutionalized it. Rubber was the most profitable crop, and unmet quotas were penalized severely: a limb was amputated. Belgium took over the colony in the early 1900s in response to international pressure.

After World War II, however, colonialism was no longer in vogue. European countries were either providing independence, or fighting it—attempting to postpone the inevitable. It was during this time that Joseph Mobutu rose to power. Through a series of shifts in power, Mobutu was able to maneuver his way solidly into the presidency. He quickly turned the country into a one-party state, and ruled for over thirty years. He enjoyed significant support from the United States, France, and Belgium, as a reward for his anti-communist stance. However, he was a brutal ruler, and embezzled billions of dollars’ worth of aid. He was deposed in 1997, the result of his failing health, and weakened grasp on the country.

His overthrow, during the First Congo War, did little to improve the situation of the DRC. Armed Hutu groups that had participated in the Rwandan Genocide, just next door to the DRC, began attacking ethnic Tutsis and surrounding tribal groups. The Rwandan Armed Forces, and guerrilla groups it had helped to create, began to fight the Hutu groups, and to push for the overthrow of Mobutu. Ugandan soldiers also invaded, fighting alongside the Rwandan troops. The Second Congo War was almost identical, and began the following year. Both Rwanda and Uganda continued funding various rebel groups against the new self-appointed ruler of the DRC. Various ethnic groups and militias throughout the country fought against each other. The Second Congo War officially ended in 2003, but the war and its aftermath caused over five million deaths by 2008. The DRC became a battleground where various African nations, from North to South, either directly or indirectly fought over resources and power.

The end of the Second Congo War only slightly alleviated the conflicts. Over 2.5 Million people remain internally displaced due to ethnic conflicts. The Kivu conflict followed, as did the Ituri conflict. Closely related to the hostilities in the First and Second wars, both conflicts involved ethnic militias that were armed and supported by other African nations. The Lord’s Resistance Army, which has not been as active in Uganda since the peace talks of 2008, still operates a low-level conflict in the DRC. Four men have been put on trial at the ICC from the DRC for acts which they committed during the Second Congo War. Importantly, in 2012Thomas Lubanga Dyilo was convicted of war crimes including the forced conscription of children.

Children have been used in armed conflicts for a long time, and for a variety of purposes. A special kind of notoriety has come to the usage of children as soldiers in recent decades. The film Invisible Children, for example, highlighted the Lord’s Resistance Army (LRA) and the way they would kidnap children into armed rebel camps. Often, this issue is identified with the African continent. Over half of the world’s current child soldiers are in Africa. However, the forcing of children to become associated with armed conflict or to participate in that conflict has happened all around the world. LRA-style kidnappings have happened on every continent, and children have been forced into becoming soldiers. Some of the more famous conflicts, though, that have involved the use of child soldiers have been the conflict in Sierra Leone, where children were often drugged and then used as executioners. A similar tactic was used during the times of the Khmer Rouge in Cambodia.

But the use of child soldiers is illegal under international law, and is a particular and horrible form of modern-day slavery. Children who are associated with armed conflicts experience incredible psychological trauma, and often struggle to regain any sense of normalcy. Their families also suffer (read more about parents of child soldiers and Angelina Atyam). Gilbert Munda is a TIP Report Hero from 2014 who works with children who used to be associated with an armed group. Having come out of a life marked by brutality and struggle, these children have to find a place to heal and a way to deal with the crimes they may or may not have committed. In Sierra Leone, for example, children were used by the Revolutionary United Front (RUF) as executioners. Young girls who are associated with armed groups are often raped, and forced to become pseudo-wives or sexual slaves.

Gilbert Munda believes ardently that these children can regain a life. His organization, CAJED, provides psycho-social support and job skills training to children who were once soldiers. Children stay for up to five weeks as they transition from being a member of an armed camp to trying to reintegrate into society. Many are returned to their families, but most still struggle with trauma. Many have committed acts they know to be unspeakable, and they have hardened themselves in order to deal with what they have seen. As one former child soldier, Ishmael Beah, put it: “...shooting someone became like drinking a glass of water.”

The DRC and Child Soldiers Now

The Democratic Republic of the Congo has made progress in terms of how it has dealt with the forced recruitment of children. It has signed all relevant international treaties and protocols, and has negotiated regional agreements. In 2003, it was estimated that one-tenth of the child soldiers in the world were in the DRC. That number is drastically reduced now. The most recent conflict, involving the M23 militia group, ended in November 2013. In 2014, the United Nations published a report that states that children are still being kidnapped, albeit at reduced rates, generally for soldiering, sexual slavery, or forced labor in mining camps.

The problem continues, and it is not isolated to Africa. Children should be free of this unspeakable horror. Learn more about Gilbert Munda, or Angelina Atyam on their profile pages.

What led to the policies concerning the use of child soldiers? 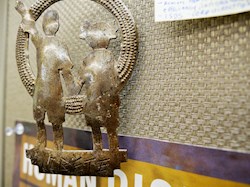