The Global Workers Justice Alliance was founded by Cathleen Caron to challenge a developing and unaddressed crisis in the globalizing economy: abused migrant workers being shut out of the justice system because they went home to their families. Starting out as an attorney defending the rights of migrant workers in Florida, she saw this denial of justice again and again. After a hard-earned class action win against a particularly exploitative farm in south Florida, she was profoundly troubled when the majority of the two thousand farmworkers never recovered the wages legally owed them because they had left Florida, many to return to their homeland of Guatemala. Cathleen’s experience was similar to other advocates across the United States. Despite diligent efforts by dedicated advocates, the reality of these workers’ lives meant that they crossed borders, complicating any legal action on their behalf.

Subsequently, Cathleen designed and spearheaded a project on human trafficking in East Timor. What she encountered in East Timor was the same as the United States--the denial of cross-border justice. She began to realize that the need “portable justice”--as she started calling it--was not confined to North America but that it was a global phenomena. Forcing workers to choose between enforcing their rights or going home seemed wholly unjust. Cathleen was determined to find another way. Earlier in her career, Cathleen had lived in Guatemala and worked on human rights issues. Having worked side by side with human rights defenders who put their life on the line to pursue justice, she developed a deep respect and admiration for their work. Reflecting on this experience, Cathleen started to believe that bringing together advocates from both sides of the border could be a way to efficiently and effectively provide the necessary resources so that workers would no longer have to abandon their rights. Upon returning to the United States, Cathleen drew upon her experiences to see if she could make justice a reality for the millions of transnational migrant workers denied justice. Starting from a small New York City apartment, Global Workers Justice Alliance has since grown into a thriving organization making an impact on thousands of migrant workers.

The mission of the Global Workers Justice Alliance is to combat worker exploitation by promoting portable justice for transnational migrants through a cross-border network of worker advocates and resources. 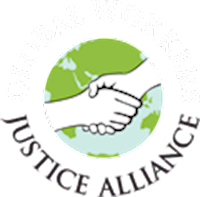 Learn how your clothes are made

Products Made by Bonded Labor - with Alternative Options

They bribe and intimidate the police. It is very dangerous to speak out against them. I’ve been attacked and threatened so many times that I no longer fear death.