June 2000 – Began public campaign to establish My Sister’s House as Sacramento’s first agency to address battering in the Asian and Pacific Islander community, and plans to develop a cultural appropriate save haven

March 2002 – Received major grant for $150,00 from the California Employment Development Department to implement My Sister’s House “Women at Work Program”, which operates out of the Broadway One Stop Career Center

May 2003 – Received a grant from the U.S. Department of Labor, Employment and Training Administration for Small Grassroots Organizations to fund the Women at Work Immigrant Domestic Violence Advocacy Project, to help battered immigrant women

October 2003 – My Sister’s House held its first Domestic Violence Training Institute. The Institute gave participants an opportunity to exchange information and learn about violence against women in the immigrant and refugee communities

November 2003 – Our first annual Run For A Safe Haven was held at William Land Park. This 5K fun run drew over 1,200 adults and children who competed individually and in over 70 teams.

April 2006 – We launched our “No Excuse For Abuse” project, which involves printing information about My Sister’s House on shopping bags in Chinese, Hmong, Tagalog, and Vietnamese. The bags are then distributed to various Asian grocery stores in the Sacramento area 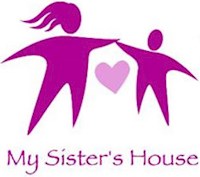