If you are looking for a vacation destination, consider traveling to Cincinnati, Ohio and visiting the National Underground Railroad Freedom Center, and particularly the modern-day slavery permanent exhibit, Invisible: Slavery Today.

The National Underground Railroad Freedom Center opened in August 2004 on the banks of the Ohio River in downtown Cincinnati, Ohio. Since then, more than 1.3 million people have visited its permanent and changing exhibits and public programs, inspiring everyone to take courageous steps for freedom.

Invisible: Slavery Today is the world's first museum-quality, permanent exhibition on the subjects of modern-day slavery and human trafficking.

The overall design and feel of Invisible is that of a dingy warehouse in an unfamiliar city, filled with wood, metal and plastic containers - shipping cartons for human beings. Through a variety of techniques and media, including videos, sounds and touch-screen presentations, Invisible offers a comprehensive examination of slavery in the modern world through the life experiences of five individuals who were caught up in one of the five most common forms of exploitation: forced labor, bonded indenture, child slavery, sex trafficking and domestic servitude. The exhibition explores the causes of slavery, the economic forces that have contributed to its growth, and the response of government, the justice system and the general public to this scourge.

But Invisible is not just a grim walk through degradation and mistreatment. A major concluding section is devoted to anti-slavery activities underway around the world, especially by the Freedom Center's partners in the exhibition: Free the Slaves, Goodweave, International Justice Mission and Polaris Project. Visitors are also asked to make a personal commitment to be 21st Century Abolitionists in the cause of freedom.

Plan your visit today from the link above. 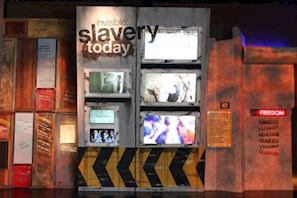