No one knows how many slaves are in the world.

The one thing lacking in the world of anti-human trafficking work is good data. We just don’t have it. Every time an organization comes out with an estimate on how many slaves there are their methodology is questioned and their numbers are proven to be false. The fact is, no one can give an exact number but people need a number in order to care. If I can’t quantify how many slaves are in the world then it doesn’t seem like a big enough issue to care about. But if I try to give numbers to help you understand and they are proven false then I don’t look credible. We are trying to balance these two needs. The AIDS movement had a very tangible disease to measure and they were still off by millions in their estimates. We know our statistics aren’t 100% true but we do know that slavery happens today. If you want concrete statistics look at how many cases have been reported.

You are apart of the problem.

Everyday we buy products that are made using slave labor. Many times I feel that the public is so outraged by slavery but when they find out that they need to make changes in their lives in order to stop it, their outrage turns to inconvenience and they stop fighting. It is important for you to know that you are creating the demand for slave made goods and that when you change what you are demanding from the market, the market will change.

It can and is happening in your community.

I personally used to think that slavery only happened in the developing world, that couldn’t possible happen here (America). I was wrong. There was a case of forced labor in the suburban neighborhood I was living in, a man and woman forced to work in a restaurant for 10 months. If you are interested in what trafficking looks like in your state check out the hotline statistics.

If you live in a country that took part in the Trans Atlantic Slave Trade your view of slavery is different than what is happening today. Are people still being sold? Absolutely. But it is happening behind closed doors not on the auction block. Because we have learned about chattel slavery we think people need to be chained to be slaves and that just isn’t true. If someone is being forced to work and cannot walk away they are a slave whether their employer is threatening them or took away their documents.

You must care about poverty and immigration laws.

People are vulnerable to being trafficked most often because of poverty. Their need to feed their family forces them to accept any kind of job that is promised to them. They are normally promised a good job and arrive to find themselves enslaved. We must continue to fight poverty if we want a chance at preventing trafficking. We also must care about immigration laws. Because getting to a place with better economic opportunities is often difficult to do legally people are forced to rely on people smugglers to have a chance at making money for their families. These smugglers charge high fees and sometimes they turn into traffickers when they arrive at their destination. The victim is forced to work to pay off the debt accrued during travel and is enslaved.

There are more adults enslaved than children.

We as society are the most offended by crimes against children, as we should be. But the focus on only children being enslaved leaves out the majority of people who are slaves in the world today, adults. Do we care less once a slave turns 18 and is technically an adult? I hope not. I said that there are not completely accurate statistics on slavery but the report released by the International Labor Organization states that only 26% of slaves are under the age of 18.

There is roughly the same amount of men enslaved as women.

In a similar vein most people tend to focus on women being enslaved, typically for sexual exploitation. The truth is that it is almost split half and half when it comes to gender (according to the International Labor Organization) at 55% women and 45% men. Men are already stigmatized when they become enslaved, they don’t need the added hurdle of the public not knowing that they exist.

There needs to be force, fraud or coercion involved.

In order for the situation to be considered slavery a person has to be compelled to work using force, fraud or coercion. Force is exactly what you would think of, hitting, being chained etc. Fraud is when someone is tricked into a position, their trafficker could have promised one job and then stole their passport when they arrived, leaving them trapped. Coercion could be threats of harm to someone close to the victim.

I have talked about this subject a lot but it is one of the largest myths we are trying to combat. There are far more situations of forced labor in the world that of sex trafficking but most of the aid money and awareness goes towards sex trafficking.

There are not more slaves today than at any point in history.

In a great TED Talk by Kevin Bales he explains that there might be more slaves in absolute number in the world today but our world population is also much larger. 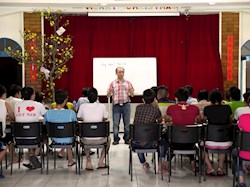 Find out how one organization combats the Vietnam to Taiwan trafficking pipeline.