Yesterday the End Slavery Now team met up with anti-trafficking activists in Kaunas, Lithuania. During our first day in the country, we learned about efforts here, the effects of the U.S. T.I.P. Report, state-run homes and impacts on three young women.

The Status of Trafficking in Lithuania

Our team met with an NGO in Kaunus for a full day yesterday. Incredibily hospitable, our host sat and explained trafficking for over eight hours. She explained that her staff of 19 worked throughout the entire country. Seeing hundreds of clients per year, about 30% of which are male victims of forced labor, the NGO seemed to be the true backbone of anti-trafficking infrastructure in the nation. Indeed, Lithuania sees male citizens trafficked from remote provinces to countries like the United Kingdom for forced criminal labor, including street peddling and shoplifting. The remaining 70% of the NGOs clients are women and girls, trafficked into prostitution and forcibly raped. Notably, when the NGO started in 2001, 100% of its cases involved sex trafficking. Identification of male and forced labor victims is on the rise.

As we listened to our host, she remembered their first prosecution - a police officer responsible for the state's anti-trafficking efforts. Law enforcement has come a long way in Lithuania, however. The NGO shared how it's focused on building relationships with law enforcement, including police, judges and lawyers. This new network of advocates encouraged our host, but she still realized, "One day we win. One day we lose."

Our host also took our team for a site visit to a state-run home for girls. Run by former Soviet officials, the home is one of two for girls throughout the country. It acts in a similar role as our American juvenile detention centers. Up to 30 girls are kept at this center (and there's currently a 10 person waiting lost) by court mandate. The girls live, work, eat and attend school inside its walls. Upon showing us around, the proud director indicated how girls aimed to have garbage duty each week - because it meant they could step outside. Immediately upon entering the center, our team struggled to manage feelings. The hosts were gracious, offerring us coffee and chocolates and boasting about the many art and music activities available to the girls, but my heart was immediately heavy. These girls appeared to have little love shown to them. Some, arrested for petty crimes, were "real" criminals; others were victims of rape, trafficking, molestation and other crimes of violence against women. Regardless, they were kept alongside one another. As I struggled to comprehend how this approach served trauma victims, like some of these girls were, our host also noted how, unfortunately, this center also became the only "safe" place for some victims. At the very least it removed traumatized girls and victims from home situations that enabled the violence.

At the center, we met with three Lithuanian girls ages 15, 16 and 17. The 15-year-old was in there because she had been gang raped, and the court placed here there for her protection. The 17-year-old has been in the center for almost two years and will be released next June when she ages out. Her mandated stay kept increasing because she attempted to run away so many times. We were told that she was "a criminal." As our host translated, we got to know a bit about these girls. Though censored by leadership, we learned their hopes and dreams. One desired to become a horse vetrinarian. I asked if she had ridden horses ever; she had not. The oldest girl wanted to become a hairdresser. I asked how she planned to do this when she left the center in nine months. She did not know. She had a brother in her hometown that may be able to help. Otherwise, the modest support she could potentially receive from the state did not seem to be enough her mind to outweigh the costs of enrolling in school - a requirement to receive the modest check. As I sat and listened to this girl, my heart hurt for how tough of a rode she has ahead of her. Already - nine months in advance - I could see the hard path of returning to an impoverished community that led to a life of petty crime and the difficult (non)choice of education. She will have spent almost three years at the girls' center by the time she leaves, and she will not have learned hairdressing skills to assist her in locating a job upon her release.

I thought you lived in Heaven

As I reflect on those three girls more and more, I'll share more about our experience. And we've collected tons of interviews and photos to illustrate the trafficking situation in Lithuania and how abolitionists are doing something about it. I want to close out this reflection with a statement made by our host in the first few hours of getting to know us. She was surprised that our team wasn't from California - not "tanned and smoking cigars." We laughed, but she was also surprised to learn about trafficking in our own country. "Mamma Mia... I though you lived in Heaven."

She asked dozens of questions about our laws, our police, our community and social stigmas around prostitution, and many other topics. We openly shared about our own country's flaws and the ways that men, women and children were trafficked in the U.S. Discussing these, she noted that these problems really are worldwide, and one of our staff members noted that when it boiled down to it, it's a human problem. What comraderie, what unity between Lithuanians and Americans when we realized that no country is perfect, but we all have incredible activists seeking good and peace. I'm hopeful for that story to emerge during this trip and our future coverage. We don't share these stories to indicate that our own country is better-equipped to handle trafficking. We're all making strides against it, and there's so much to share with one another. And, importantly, there is so much hope when we realize there are others doing this work and facing - and overcoming - the same obstacles we are. Note: please forgive typos, mistakes and other errors. We'll edit these posts as we return stateside, but for now enjoy the raw thoughts from our team! 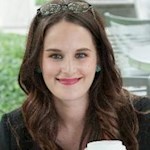 Brooke is the Executive Director of End Slavery Now, a project of the National Underground Railroad Freedom Center. She lives in Cincinnati, Ohio. Follow her on Twitter at @brooke_hath

Kristina Misiniene from Caritas Lithuania discusses the link between migration and trafficking.