How Have Children Become Involved in the Armed Conflict in Colombia?

One of the most lamentable aspects of Colombia’s 50 decade long war is the use of child soldiers by armed groups and the army. As I mentioned in my previous blog, before the Optional Protocol to the Convention on the Rights of the Child on the Involvement of Children in Armed Conflict was signed on September 6, 2000, there were approximately 16,000 minors who were part of the Colombian armed forces. This internal conflict has evoked the involvement of government armed forces, guerrillas since the 1960s (ELN and FARC), paramilitary groups originally set up during the 1980s and now tacitly supported by the government and criminal bands such as BACRIM. The reasons for conflict range from land and cocoa control, to mining and oil resources. The oldest and largest group among Colombia’s left-wing rebels and one of the world’s richest guerrilla armies is the FARC (Fuerzas Armadas Revolucionarias de Colombia).

In 2012, Dr. Natalia Springer conducted a study concerning the profile of child combatants, the reasons for involvement, the different ways of recruitment and the conflict dynamics that allow for the perpetration of these crimes. She then expanded upon the results of her research in the book Como Corderos Entre Lobos (As Lambs Among Wolves), with the purpose of making people aware of this humanitarian emergency under development.

The Profile of a Child Combatant

Springer states that all the children interviewed come from really poor families and recorded some level of malnutrition. In addition, all children have been directly affected by the violence in their local regions and have suffered the loss or disappearance of some family member. Boys and girls are recruited at an ever younger age, with 69% of them being younger than 15 years old. Today, the average is down to 12.1 years old. Some of these children are born into the armed groups because their parents or siblings are members. Alarmigly, an indigenous boy or girl is 674 times more likely to be affected by the armed conflict or to be recruited or used by an armed group than any other child in the whole country.

The guerrillas refer to child soldiers as “little bees” for their agility and power to sting, while the paramilitaries call them “little bells” because they are deployed in front to draw fire, detect traps and serve as an early warning system.

Of the children Dr. Springer and her team interviewed, an overwhelming majority of 81% affirmed that their recruitment was voluntary, and only 18% reported being forcibly recruited.

The question of forced or voluntary recruitment is interestingly debated by various professionals that comment on the issue of child soldiers. Humanitarian law portrays child soldiers as victims and does not consider any framework for understanding the agency of children, meaning the ability of a child to act independently and to make his or her own free choices. Instead, international humanitarian law built policies with an extreme protectionist construction of childhood. Anthropological scholarship, on the other hand, understands context as informing all things about children, including distinctions of age. This distinction is incredibly important when it comes to reintegrating demobilized child soldiers because it will determine the course of action that will be taken by social workers and psychologists. A reintegration process centered on recognizing and boosting children’s agency will be more efficient at letting children develop their own coping techniques and at allowing them to take ownership of their own reintegration process. Programs that do not take into account children’s agency treat children as powerless victims of terrible acts of terror and horror. Programs such as these will provide children with the necessary assistance to survive but will make most decisions for the children.

We would hate to admit that in some circumstances, becoming a soldier may be a necessary and positive choice for children. In their accounts, many child soldiers explain the sense of power, refuge and safety they felt while in the armed groups. Now, just think of the problems that arise in programs that see children as powerless and defenseless and do not let the child participate in his or her own process. This approach can lead a child to leave and most likely return to the group from which he or she fled or was rescued from.

Transforming a Victim into a Victimizer

The recruitment process is like many others – it is gradual, methodical and selective. Boys and girls are contacted in various ways: through their families (39%), personally (33%) or taken by a family member who is also a member of the armed group (9%). Perhaps surprisingly, 8% of boys and girls reported having joined in an effort to exact vengeance or found it as the best job opportunity available at the time.

The life of children in the guerrilla forces is very much like that of adults. They are expected to sacrifice their freedom and autonomy upon joining the guerrillas. Political education is given particular importance. FARC uses a combination of ideologies ranging from Marxism-Leninism, to Bolivarianism and revolutionary Socialism, to left-wing nationalism. Children and adults alike are taught FARC’s political platform of agrarianism and anti-imperialism. Children have to carry their full kit, including tents and cooking equipment, on their shoulders, as well as their assault riffle and munitions.

Dr. Springer identifies four phases that children go through while in the ranks: adaptation, indoctrination and emotional hardening, servitude and military training. Adaptation is accompanied with strict and constant surveillance. Some children are given incentives and awards in order to stay. In the indoctrination stage, children are coerced and manipulated into adhering to the ideas and principles of their respective armed group. All reason is substituted by a dogma, a state of consciousness where a sectarian thinking emerges. The servitude stage produces alienation of consciousness in favor of a higher order. In the last stage, children receive military technical instruction. They are taught to fight, to defend and how to survive in extreme conditions. They are made to communicate through secret idioms and to obey strict codes of conduct and standards of treatment to internalize the enemy.

It is important to understand that there are also consequences to recognizing children’s agency and active participation. Before the Ley 1448, Colombia did not have legislation affording special legal status or treatment to child soldiers. Those that deserted and those who were captured were considered criminals. There were cases in which these child “criminals” were not even presented before a judge to be tried.

Signed into law by President Santos on June 2011, the Victim and Land Restitution Law (commonly referred to as Law 1448 or the Victims Law) aims at giving back millions of hectares of lands abandoned or stolen as a result of human rights abuses and violations. On the issue of minors, the law recognizes child victims of forced recruitment as victims as long as they have not attained the age of 18 at the time of their demobilization. In these cases, the state has the responsibility of granting victims their rights, which recognized by Law 1448 as right to truth, justice, reparation and non-repetition.

This law also recognized the Colombian Family Welfare Institute as the main agency responsible for the reintegration of child combatants. This agency has looked after nearly 6,000 former child combatants who either escaped from armed groups or were captured by government troops.

Starting in October 2012, negotiations to end the 50-year war started to take place in La Havana, Cuba. After Colombia’s Ministry of Defense released figures suggesting that since 2002, 2,600 children under the age of 18 have left the FARC the government called on the FARC to immediately hand over all those minors. The FARC responded by saying that they would stop recruiting children younger than 17. Although they have not taken much action on what they promised, the government hopes for its realization once the peace process concludes.

The "Chocolate Slaves" of the Ivory Coast

Cocoa is the main ingredient found in chocolate. A large percentage of the world's cocoa comes from the Ivory Coast in West Africa. Many times, forced labor and child labor are used to harvest cocoa beans. Learn more at the Insights Lecture Series at the Cincinnati Museum Center on October 4th, 2018. 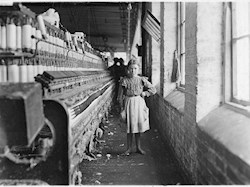 Where's the Line When It Comes to Child Labor

The line can get blurry when it comes to determining which cases of child labor in fact, illegal.