Human Trafficking is rising to the attention of both local Governments and the International Community, and rightly so. For years it has remained the fastest growing type of organized crime in the world. With over 27 million people being exploited through this crime and just 1-2% escaping—many of those ending up re-trafficked—Human Trafficking has truly reached epidemic proportions.

What are the driving factors of this crime? What has brought Human Trafficking to this epidemic level?

As a business, Human Trafficking has the same driving factors as any other business: supply and demand. Countries of destination are predominantly representing the demand side, and countries of origin are the supply. In essence, a supply translates to a group of vulnerable people. The most vulnerable people groups in our world today would arguably be refugees, migrants and internally displaced persons. The UNHCR reports that at the end of 2013, 51.2 million individuals were forcibly displaced worldwide as a result of persecution, conflict, generalized violence, or human rights violations .

These are people whose lives are marked by poverty, conflicts, wars and famine.

They are driven by desperation to escape their current reality to find a better opportunity of life. They are often forced out of their homes with no identification documents, no one who will notice if they go missing and they often travel to countries where they do not know the language or have local contacts. Many end up trusting so-called people smugglers to bring them to their desired destination, and often give everything they own to get away from the circumstances that they left behind. Even worse, sometimes they obtain loans from loan sharks to pay traffickers to go to another country—a debt that is then inherited by the person’s family.

Unfortunately, people are easily lured by offers of opportunity abroad. Their desperation allows some traffickers to recruit from abroad. This lowers the risk for the trafficker who then no longer has to attempt to physically transport their victim, which is dangerous, and can instead wait for them at the destination and then exploit them upon arrival.

Through our work at The A21 Campaign, we have seen this first hand in our operations in Greece, Bulgaria and the Ukraine. Due to its financial crisis, as well as its location at Europe’s borders, Greece has become a primary gateway for trafficking. Because of its location on the frontier, and some of its financial difficulties, Greece is a primary entry point into Europe. If someone can make their way into Greece, they are inside Europe’s open border zone (the “Schengen Zone”), which makes it easy to travel further into northern Europe. In 2011, the European Court of Justice found that 90% of all irregular entry into Europe was through the Greek borders.

With sometimes hundreds of people arriving in Greece every day, the Greek system is struggling to deal with the challenge. Border fences have been built with the assistance of the EU’s Frontex border agency, and temporary screening stations have been setup; all in an effort to handle the situation. I went to see one of these screening stations and met a group of 35 people who, the night before, had crossed the infamous Evros River that separates Greece and Turkey. With many people arriving in Greece via this route, and not enough space in Greek Detention Centers, most of the migrants are given a piece of paper informing them that they are illegally in the country and they have to leave the country within 30 days. From this point, they are simply released and walk out of the station once their paperwork has been processed.

I spoke to some of these people marked for deportation who had left Algeria months earlier; they said they had been promise of a job in Athens. When I asked them how they would travel the 600 miles they said “taxi”. Surprised, I asked them if they had any money for that journey, to which they said they didn’t. I believed that, as I could see they were holding all their belongings in small plastic bags. Walking outside the station, I was again surprised to see a long row of taxies waiting on the dirt road. I went to ask one taxi driver what he was doing there, and he told me that he would be at this location many times a week to pick up people and drive them across Greece. He told me how people in Greece book his taxi to do so. I asked him if he ever takes people all the way to Athens, as this seems hard to believe. He promptly responded, “Yes I do, especially women and children”.

80% of victims of Human Trafficking are women and children.

To put the above scenario in perspective, think of it this way: some unnamed person is prepared to pay the equivalent of a fulltime monthly salary in Greece just in order to transport an illegal migrant, who does not have the proper paperwork or visa to stay in the country, who has just been given a deportation order, does not speak the language and has little or no education. This is in a country that currently has an unemployment rate of over 25%, and over 54% for people under the age of 25. These people are vulnerable to exploitation, and those taxis could very well be delivering them into the hands of traffickers.

But the real challenge is that it is very difficult to identify victims of trafficking at this entry point, because the migrants do not identify themselves as victims and believe they have just arrived in paradise. They believe that Europe is full of jobs and that anything is better than where they came from. They have no, or little, awareness of human trafficking. They have no money, they have nowhere to go and there is no one looking for them.

Through the work of A21 we have assisted survivors of Human Trafficking from 25 different nations. If there is one thing that is true about each and every victim, it is that, though every story is different, every one of them was in a vulnerable situation at the point they were trafficked. Whether they were a migrant, a refugee, poor, a single mom, forced to provide for sick family or a runaway teen, they were all in a situation that made them vulnerable to exploitation.

There are few statistics available to show just how big the problem really is, especially concerning the links between migration and trafficking. However, it is clear that migration is a significant contributor in making vulnerable people an easy target for the booming industry of Human Trafficking. 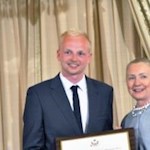 Philip Hyldgaard is the Global Operations Manager for The A21 Campaign, and a 2012 TIP Report Hero. He helped establish the organization's first office in Greece, and opened their first shelter.