Ishmael Beah was only 12 years old when a government army pulled him into the Sierra Leone armed conflict in 1993. Confused and afraid, Beah witnessed and participated in the atrocities of the civil war until he was rescued by UNICEF in 1996.

According to Beah, his life before the war was very simple but very happy. Life was peaceful, beautiful, and the people in his village were kind, trusting and amicable. They felt far from the rage and spread of the war’s turmoil. Beah was a growing boy, interested in American hip-hop, and lived a normal life with his family.

When he was just 12 years old, he and his friends left home to perform in a talent contest in a town a few miles away. While on the road, they found out that their village was attacked, so Beah and his friends ran back home only to face a horrific scene.

“We encountered people running,” he describes. “We saw men carrying their dead children in their arms. I saw a man cry for the first time in my life, so this really disturbed me quite a bit. So we decided that, you know, we can't go back home anymore and decided to wait. Hopefully to see our families come through, but they didn't come.”

With their homes destroyed and with their safety at risk, Beah and his friends roamed from village to village scrounging for food and water. After a year of wandering the countryside, Beah received news that his family was at a nearby village. As he approached the village, however, Beah only came upon gunfire, smoke and ashes. The whole village was burned down, and his family members were incinerated along with it.

Without a family to reconcile with, Beah lost hope and found no reason to keep running. Beah went to a village run by government soldiers. There was food, soccer games and places to sleep, and Beah though it was a good place to stay. Staying at the soldiers’ village came with a price.

“One day they just said, you know if you're in this village, you're gonna have to fight, otherwise you can leave... Some people tried to leave, but they were shot.”

He continues, “First, you know, you get your own weapon and everything and the magazines and the bullets, and then they give you drugs. I was descending into this hell so quickly, and I just started shooting, and that's what I did for over two years basically. Whoever the commander said, ‘This guy is the enemy,’ there were no questions asked. There was no second guessing because when you ask a question and you say ‘Why,’ they’ll shoot you right away.”

Beah explains, “What happens in the context of war is that, in order for you to make a child into a killer, you destroy everything that they know, which is what happened to me and my town. My family was killed, all of my family, so I had nothing. We had come to believe whatever our commanders were saying about how these other guys didn't deserve to live, that we were doing the right thing and this group was the only thing that was slightly organized; and so, they become like a surrogate family in a weird way.”

Beah says his lieutenant became his father figure, and it was that bond that helped United Nations (UN) workers rescue Beah from the armed group.

“The lieutenant went around and selected a few of us and said, ‘This man will take you and give you another life.’ And they took our weapons from us, and we actually felt that we were being pulled from family again.”

The UN workers brought Beah and other child soldiers to a rehabilitation center in Freetown. A year later, Beah spoke at the UN presentation of the Machel Report on the Impact of Armed Conflict on Children. 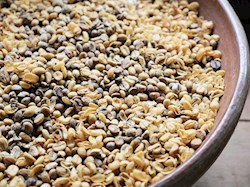 One of my current projects is to get forced gang membership redefined as trafficking as forced child soldiering.