Artist, entrepreneur, public speaker and abolitionist Justin Dillon utilizes social media, film and music to make the issue of modern-day slavery public knowledge. He is the founder and CEO of Made in a Free World, which engages in several projects around the world.

Made in a Free World conducts fieldwork in India and Ghana. In Jharkhand, India, Dillon and his team are raising funds to support Safe Villages. These villages are meant to protect, educate and empower Indian children who would otherwise be working at nearby mines. Similarly, the project in Ghana aims to stop the use of child labor by rescuing, rehabilitating and reintegrating children working in the fishing industry.

Dillon directed Call + Response in 2008. This “rockumentary” explores the slave trade in the 21st century and includes commentary by popular personalities such as Cornel West, Madeleine Albright and Nicholas Kristof. Moby, Natasha Bedingfield, Cold War Kids, Imogen Heap, Five for Fighting, Switchfoot and Matisyahu also make musical appearances. The film resulted in the creation of the Fair Trade Fund which helps support nonprofit organizations, namely the Not for Sale Campaign, International Justice Mission, Giving Children Hopeand Free the Slaves. Profits from the film, DVD, soundtrack and iTunes downloads are directed to these projects.

Dillon followed his first film with a documentary called Common Dreams. In this film, Dillon and Common, a Grammy award winning hip-hop artist, travel to Haiti where an estimated 300,000 children are working as domestic servants. The film aired worldwide and raised thousands for the Restavek Freedom Foundation.

Outside of fieldwork, Dillon also uses his fine arts background to deliver the message about modern-day slavery in interactive and engaging ways.

In 2011, in cooperation with the U.S. State Department, Dillon’s Fair Trade Fund unveiled slaveryfootprint.org.Slavery Footprint aims to increase consumer awareness by connecting the customer to the supply chain and describing slave labor that may have been used in the manufacturing of everyday products. This site defines a slave as “anyone who is forced to work without pay, being economically exploited and is unable to walk away.”

Consumers go on the site or access the mobile app and answer a series of questions. Questions relate to the consumer’s location, household type, number of children, number of cars and food and typical purchases. While taking the survey, small notifications with slave labor and human trafficking information pop up. One example says, “Every day tens of thousands of American women buy makeup. Every day tens of thousands of Indian children mine mica, which is the little sparkles in the makeup.” Based on raw material and production sources, the site uses a formula to calculate how many slaves might have been used to make the items that the consumer uses.

At the end, users have the option to learn more or to take action by writing to companies and asking them to support fair trade. The goal of the site is to amplify the conversation about slave labor and to encourage companies to hire third-party auditors that would then determine if their supply chains are slave-free.

Recently, Made in a Free World’s efforts to reconnect individuals and companies with the movement against slavery resulted in the production of a video advocacy campaign called I’m with Lincoln. The purpose of the film is to raise awareness about the existence of human trafficking and to suggest ways in which the general populace can play an active role in the fight against modern-day slavery. For instance, one tool provided in the campaign enables viewers to forward letters to U.S. Senators asking them to make fighting human trafficking a priority.

Indeed, Dillon’s main initiative is to make modern-day slavery a part of everyday conversations. He wants to expose this issue because the more people that know, the more individuals there are to take action. He has appeared on and been covered by CNN, Katie Couric, Dr. Phil, MSNBC, The New York Times, Glamour,Cosmopolitan, Ad Week, CBS, Fox, NPR, The Washington Post, Rolling Stone and Fast Company. He has spoken at the White House, the UN, Clinton Global Initiative, Global Philanthropy Forum, Harvard, Princeton, Stanford and other venues. Dillon served on advisory groups for the UN, U.S. State Department and White House. 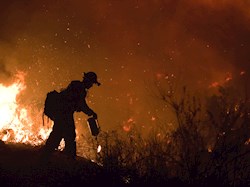 This Black History Month, we’ll explore the years following the passage of the 13th amendment and the development of state-imposed forced labor in the country.

Forced Labor in the United States

The Urban Institute did a study on what forced labor looked like within the United States.