This is the story of Annam, born in a village outside Dhaka, Bangladesh. Forced into a child marriage at age 12. Trafficked to a Mumbai brothel at age 17. Rescued at age 22. Repatriated to Bangladesh at age 25.

This story has a happy ending, but it is a qualified kind of happy, and not really an ending. This is as it should be, because the conditions of poverty, illiteracy, and gender/caste discrimination that inform Annam’s trafficking have not been alleviated, and because her life continues, her ordeal as a trafficked woman behind her, but her dreams and potential as yet not fully realized.

When I met Annam, she was Team Leader and Master Artisan in the Made By Survivors jewelry production program at the Rescue Foundation Shelter Home in Boisar, India. Joining with local partners such as Rescue Foundation, Made By Survivors works in the reconstruction or restoration space of the anti-trafficking community, supporting local efforts for prevention and rebuilding lives in the aftermath of slavery. Given that the vulnerability resulting from extreme poverty and gender discrimination is a root cause for trafficking, prevention means addressing those massive inequities, providing opportunities for what we call “prosperity wages” and helping to shift women’s status by training them in high-status, high-income professions. Much attention is paid in the global media to the spectacular moment of the brothel raid, the dangerous rescue mission. I have met men who do this incredibly hazardous work, and they are, truly, heroes. One young lawyer told me that his family had turned their backs on him because of his choice to use his skills and education to support such girls. I am in awe of his integrity, commitment, and courage in continuing his work in spite of stigma, backlash, and very real personal loss, and every time I log into Facebook and see pictures of him doting on his infant daughter, I feel hope for a different future. I take nothing away from the enormity of that work and its impacts by inviting you to join me in thinking about what happens next—a subject not much covered in international news.

Trafficked by a Neighbor

Annam was trafficked by a neighbor, thrown in the bed of a truck with several other girls. Her leg was broken when she attempted to escape by climbing out of the truck while it was in motion, and she will always walk with a slight limp—a reminder, perhaps, of her suffering, but also of her brave resistance to exploitation. Annam spent a year in the Rescue Foundation Shelter Home receiving medical and psychological aftercare before she joined the Made By Survivors jewelry production training program, where she discovered that she is a natural with this creative work. After years experimenting with retailing different handicrafts that emerged from survivors’ own cultural traditions, MBS turned to jewelry made from silver, copper, brass, and gold because we realized we could achieve two goals at once: earning higher margins on the products made and sold by survivors (meaning higher wages and the ability to employ more and more survivors), and empowering women within the context of severe gender discrimination by training them in metalsmithing, a high status, male-only profession in India. We are proud to announce the first cohort of trained female metalsmiths in India!

A Metal Smith and Designer

Annam spent much of her free time working on her own designs, several of which have become among the most popular in the MBS jewelry lines, and when I arrived she shared them with me with great pride. She also told me about a major choice she was facing. As a Team Leader, Annam earned a high wage commensurate with her experience, skill, and with the added responsibilities of training other artisans and helping to keep production on schedule. She sent a good deal of that money home to her sister in hopes that it would help to fund education for her daughter, whom Annam had not seen since she was trafficked six years earlier. It wasn’t only the money, though, that was transforming her life; it was also the identity she had begun to forge as a metalsmith and designer. It was the first she had known of her own talent, as well as her own desires, dreams, and ambitions. The only problem was that in order to continue to earn this wage, Annam would have to remain in the shelter home near the destination to which she’d been trafficked, rather than returning home to be with her daughter (a problem that plagues the many income generation programs for trafficking survivors and informs the need for economic empowerment solutions that can travel with this migratory population). Stay in Mumbai and have income, status, safety, and meaningful work? Or return home to the same conditions from which she was trafficked, without income or the status it brings, but able to love, raise, and be part of her daughter’s life. To make the decision more complex, Annam suspected that her husband had been part of her trafficking—and as her daughter reached pre-adolescence, Annam feared desperately that the same fate would await her.

In the end, the decision was made for her when the Indian government changed rules around repatriation and she was summarily sent home. MBS worked hard to try to set up a jewelry production program in Bangladesh to support Annam and the other eight trained artisans who were repatriated to the same area, but as is so often the case, particularly with such restoration programs, fundraising efforts fell short. Annam has been home for about a year, living and working with her brother, and trying to gain better access to her daughter, who is still in the custody of her ex-husband. MBS checks on her regularly, and she has not been re-trafficked (a triumph in itself, as up to 50% of returned trafficking survivors are re-trafficked at least once).

I could share with you stories that represent greater, unfettered success for survivors of brothel slavery (Priya, who earns enough with MBS to have rented an apartment for herself and her mother, whom she was able to bring out of the red light district; Vani, who is about to become part owner in a MBS jewelry production center, the first to be franchised as a survivor-owned business; or Anibha, who is headed for college where she hopes to become an advocate, fighting cases against traffickers). I wanted instead to share Annam’s story because it is more closely aligned with the reality for those who are fortunate enough to be returned from brothel slavery: a happy ending, to be sure, because she no longer experiences the unbearable conditions of sexual exploitation, but a qualified kind of happy, because she is not yet able to live into her dream of continuing her work as jewelry designer and metalsmith, nor has she been able to gain custody of her daughter.

Most important to this story is the fact that it’s not really an ending at all. Annam will continue to live and to work and to hope and to dream, and it is up to all of us to continue the fight against global slavery and exploitation that includes helping to reconstruct the lives of people broken by it in the amazing event that they find their way out. 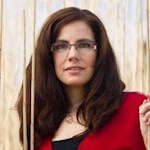 Elizabeth Swanson Goldberg, Ph.D., is Professor of English and Chair of the Arts and Humanities Division at Babson College. Author of Beyond Terror: Gender, Narrative, Human Rights (Rutgers University Press 2007), she is the author of many articles and co-editor of two edited collections on the subject of literature and human rights. Dr. Goldberg serves as Board Chair for Made By Survivors, an international NGO that fights human trafficking using economic empowerment, education, and hope. She also directs the Women’s Entrepreneurial Development Laboratory, housed in the Lewis Institute Social Innovation Lab at Babson College, an innovation space dedicated to testing business models to fight slavery and human trafficking, poverty, and marginalization of women.

Make 2019 the year you become involved in the modern day abolitionist movement.