Recently, Jon Stewart from The Daily Show challenged Bill O'Reilly to acknowledge white privilege, and the legacy of the trans-Atlantic slave trade. It was a challenging clip to watch, and informative about the state of affairs in our society. I agreed with, and appreciated, most of what Jon Stewart said except one key point. He said, “slavery no longer exists.” As most people reading this blog hopefully know, that statement is uninformed and not true.

Many people in the anti-trafficking and anti-slavery movement, myself included, have advocated for a move beyond education and awareness raising. I still stand by the statement, in some regard, that we often get stuck at awareness raising and don't take action. In a culture of constant information flow, my guess is that educational and awareness-based events lead people to see human trafficking and slavery as “just another social issue” to care or not care about. Just yesterday, someone asked me what social issue I care about. I said I care about survivors of slavery. Her response: “Oh, cool. That's great.” To me, her response fell off her tongue as if it was no big deal. I could interpret this several ways: (1) She is also an activist in the anti-slavery movement and knows all about it, (2) She has no idea about the slavery that exists today, or (3) She kind of knows about slavery that happens today but it's become so commonplace that it's no big deal.

Okay, so maybe I took it personally. As if it's inconceivable to me that she would not respond with more gravitas or seriousness. I was somewhat expecting her to say, “Wait, what? Slavery? What do you mean?” And maybe she felt self-conscious and didn't want to admit that she didn't know. I have no idea. What I do know is that we have taken for granted that there is slavery in our world. I have heard people say, “Oh yeah, I'm sure my t-shirt was made by some child slave in Asia.” How are phrases like this spoken as if we are talking about what we ate for breakfast this morning?

As a society, we seem to assume both that slavery has ended and that it is commonplace. Why this is and what do we do about it?

Why we assume slavery has ended

In elementary school, we learn through our textbooks that slavery has ended. We learn about Abraham Lincoln, Harriet Tubman, and the 13th Amendment. In high school, I learned about Jim Crow laws. I learned about the landmark Brown vs. Board of Education case and how our country finally acknowledged that even though de jure segregation didn't exist, de facto segregation existed. In other words, segregation was not allowed by law, however it was existing ‘in fact’ or in practice. Essentially, the laws abolishing segregation were not enforced. And yet, even though Brown v. Board of Education still sticks with me as a lesson we can learn from today, the overall narrative I took away from my history classes was this: the Civil Rights Movement led to huge strides in racial equity and mitigated the long-term effects of slavery. This might be true in some sense, and yet there are many more strides to go. As Jon Stewart might have meant to say, legal/de jure slavery no longer exists, but it absolutely exists in fact.

Since our history classes focus mainly on the United States, or paint broad strokes of World History, we don't learn that it took quite some time for slavery to be legally abolished in the entire world. In Mauritania, slavery wasn't legally abolished until 1981. It wasn't punishable as a crime until 2007. We also do not learn about so-called comfort women in Korea, commercial sexual exploitation of children, child soldiers, child marriage, and other forms of human trafficking and slavery that have existed for many years. We typically stick to a specific narrative about slavery. We think of it mainly as slaves on sugar cane and cotton plantations, and we act as if we are morally superior to “those” people in history who validated slavery. We celebrate or demonize Presidents who held slaves, and we believe that they should have been of greater moral character than most everyone else in their society at the time. We assume that everyone in the 21st Century must think slavery is abhorrent and therefore it can't be true that it exists, so we continue to act naïve, or even outright deny the fact that slavery exists.

How do we change the narrative of slavery being “over”?

Recently, a person asked me how to make human trafficking and slavery a topic of conversation in her community. My response was simple: talk about it. Bring it up as a topic over and over again. We often think that we need to do big or complicated things to make a difference. Simply speaking up about something is an action. Here are a few tips to guide you in your conversations:

1. Get educated about the issue so that you can speak from an informed place.

2. Connect the issues of slavery to other issues your community cares about – immigration, education, poverty, child abuse, etc.

3. Read about how slavery exists in other countries and see how the timeline fits with the “legal” abolition of slavery.

4. Refrain from diluting the words slave and slavery by using it colloquially. People will often say “I'm enslaved to my job, my boss, my wife, my parent, etc.” Since I know that people can literally be enslaved to their boss or wife or parent, I take these comments seriously. If you are not enslaved, what are you really trying to communicate?

5. Reflect on any desire to moralize, pass judgment, or spew contempt at other people. This is about you, not them. How might you be “guilty” of the same thing you want to pass judgment on?

6. Be mindful of these thoughts: “Oh, they don't want to hear about it.” or “I don't want to bring up an uncomfortable topic.” These shouldn’t stop you. Use your empathy to imagine: if we, as free people, don't want to merely bring up a topic of conversation, how might people who are exploited feel? Slavery is an uncomfortable topic. The discomfort is not the problem, but can be channeled. Discomfort can motivate us to do something about injustice. As Audre Lorde said: “Your silence will not protect you.” 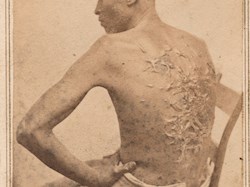 Over the past 15 years, the antislavery movement’s visual culture has depicted a world of 30 million slaves. Beyond the inevitable presence of chains and bars, much of this visual culture uses four main tropes: the supplicant slave, the scourged back, the auction block and the slave ship. 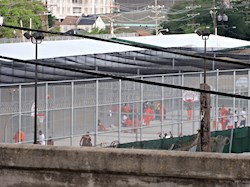 Download the Sweat & Toil app to better understand the labor behind products and materials in your supply chain.