In 2006, Cambodian Vannak Prum arrived in Malai, a city located in northwestern Cambodia along the Thai border, with the promise of a job. Prum left his pregnant wife in the hopes of returning home in a few months with the money to support his growing family. Instead, he was forced into slavery on a Thai fishing boat where he endured torture, starvation and the constant threat of death.  Prum, a victim of deception and forced labor, would not see his family for four years.

Prum’s story began in his native Cambodian village where he supported his pregnant wife and searched for a job that would cover the expected medical bill of her delivery.  One day, a man on a motorbike taxi approached him and informed him that the only available jobs were across the border in Thailand.  The man claimed he could get Prum a job drying fish.  Naturally, Prum was suspicious and even initially refused the offer, but unable to find any work, he changed his mind and soon traveled with the man to Malai.  Prum joined 30 other men and women in Malai, and together they traveled across the border into Thailand where a truck waited to pick them up.  Prum and his companions crammed into the bed of the truck, stacked side by side and one on top of the other.  They were covered with a tarp.

Unbeknownst to them, the group’s destination was a small, windowless, cement room that remained locked from the outside.  After arriving at the room, Prum, using a small hole in the wall, saw the ocean and several fishing boats.  At that moment he realized he had been sold to work on a boat.  In the morning Prum and the other captives were given clothing and taken to the boat where they were held below deck until the ship traveled far out to sea.

Prum spent three years trapped on that fishing boat, enduring dangerous and grueling work for up to 20 hours a day with little to no sleep.  In addition to difficult working conditions, Prum and the other workers were subjected to beatings and torture from their traffickers for slacking off or acting out.  Prum endured a vicious beating with the tail of a stingray.  Others suffered even harsher punishments; one man was beheaded by the captain right in front of Prum.

Prum made his daring escape one night when the boat was on its way to acquire a Malaysian fishing license.  It was the first time in three years that Prum saw land, and he knew that he must take advantage of the opportunity.  Prum was well aware of the consequences of being caught trying to escape; if a man was seen jumping ship, the traffickers would turn around and retrieve their property. Earlier Prum witnessed a 50-year-old man leap overboard only to be pulled back on to the ship minutes later. The crew gathered and found the man lying on the deck of the ship, choking on sea water; the captain took one look at him and ordered that he be thrown back into the sea.  Despite the risks, Prum and another man dove overboard around midnight and swam several miles to shore using emptied fish sauce containers as buoys.  After spending the night in the forest, Prum made his way to a police station where he pleaded with the authorities to send him back to Cambodia. The officers picked up a phone, placed a call and soon a red car arrived to pick him up. Prum watched as the driver and the officials exchanged money.  He had been sold to work on a palm oil plantation where he would be kept for four more months.

One night while on the plantation, Prum and the others gathered to celebrate their new situation. Although they were still enslaved, the men were much happier to be on the plantation rather than trapped on a fishing boat.  The celebration took an unfortunate turn, and a fight broke out. In an attempt to break up the quarrel and help his friend, Prum was slashed across the collarbone with a knife and wounded. He was taken to a hospital to have his injuries treated and, for the first time, was able to access a phone to contact officials in Cambodia.  After hospitalization Prum was jailed, but it wasn’t long before Manfred Hornung, a man working for a Cambodian human rights organization, contacted Prum to document his story and help him get back to Cambodia.  Unfortunately, Prum’s journey was far from over.  From the hospital, Prum was brought before a judge where at the suggestion of local authorities, he confessed to being an illegal immigrant instead of explaining he was trafficked.  The police, aware of the dangers of having their activities exposed, had coached Prum to lie to the judge about his situation under the guise that he would be sent home sooner.  Although Prum was sentenced to three months in jail, he spent an additional seven months locked up in institutions before he was finally released on May 15, 2010.

After four years, Prum was finally able to return home to Cambodia.  He made it his mission to educate the people of Cambodia on the dangers of human trafficking through rich illustrations of his personal experience.  On June 19, 2012, Prum was named a Trafficking in Persons Hero, an extraordinary honor from the Department of State, for his work in combating modern-day slavery. 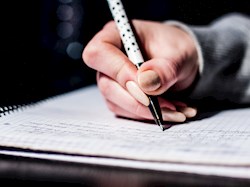 Teach Your Kids About Online Safety

Put Up A Flyer

Inform your community about the human trafficking indicators and the hotline