One of my earliest memories is walking through the hallways of my elementary school seeing posters with sayings like “you can’t get AIDS from a hug and a kiss.” This would have been around the time President Ronald Reagan finally started mentioning the word “AIDS” during speeches and press conferences. By that time over 5,000 residents of the United States – not to mention countless more around the globe -- had passed away from the disease. Many of these individuals were members of populations who faced widespread discrimination. Some of these groups included gay men, transgender women, Haitian immigrants and refugees, sex workers, and people addicted to IV drugs. My uncle Myron who left behind a long-term partner, Pedro, was one of these early deaths.

The vulnerability of oppressed populations to HIV/AIDS infection is a major reason why the National Underground Railroad Freedom Center (NURFC) is honoring World AIDS Day. While it is well known – or should be – that straight, white men of means can and do get infected, African Americans, LGBT folks, and lower income communities are still at higher risk. According to the CDC, in 2016 4,560 African American women received an HIV diagnosis, compared with 1,450 white women and 1,168 Hispanic/Latina women [1]. While this rate of infection is lower than in past years, it is still unacceptably high especially when taking into account the fact that African Americans comprise 12% of the US population.

Meanwhile, while rates of HIV infection among gay men has stabilized, as of 2014 this population comprised 56% of new HIV cases [2]. Young African American gay men – a minority within a minority -- account for more new cases of HIV infection in the United States than any other population [3]. The reasons for this are much the same as back in the 80s when those PSA posters went up around my school; fewer official support networks, more obstacles to public health interventions, and less access to accurate information.

HIV/AIDS is also, sadly, highly relevant to NURFC’s involvement in the fight against modern-day enslavement. Sex trafficking is not only a humanitarian crisis, but also a public health one. Survivors of this atrocity are at substantial risk of HIV infection. This is due in part to the factors described above, not least of which are a lack of support networks and access to education. However, there is an even more sinister force at play. According to a 2013 study conducted by Harvard’s School of Public Health, women who are forced into sex work typically experience sexual violence. They are also unable to insist that their clients use safer sex techniques. This increases the likelihood of HIV infection 11-fold, as opposed to women who report entering the sex industry voluntarily [4]. HIV positive trafficking victims have little hope of obtaining treatment and may even be abandoned by their traffickers once they become too sick to service clients. It is also important to remember that women and girls trapped in other forms of modern day enslavement, such as forced labor and domestic servitude, are vulnerable to sexual assault and have few avenues for recourse.

Curbing sex trafficking is a major step towards reducing rates of HIV infection. Framing the fight against modern day enslavement in this way could be a major step towards the elimination of both crises. At the same time, it is important not to demonize people living with HIV/AIDS, particularly if they are trafficking victims. Doing so is a form of re-victimization. Fortunately many organizations, such as the joint United Nations Program on HIV/AIDS, have started tackling issues such as this from a human rights standpoint.

It has been over 20 years since I saw those HIV/AIDS PSAs on the walls of my elementary school. Since then I’ve grown up, graduated high school and college, and come out as a gay man. I’ve made many friends, some of them people living with HIV/AIDS, from all walks of life. In some cases, I’ve been with them in the counselor’s office as they receive life changing news.

At the same time, I’ve witnessed HIV/AIDS go from death sentence to manageable medical condition. I’ve seen the stigma of HIV infection lessen (at least here in the US). I’ve also seen hopeful signs that there may be a cure, or at least a vaccine, in my lifetime. HIV medications have also become less hard on a person’s system.

Regardless: people living with HIV/AIDS, be they a classmate or a trafficking victim – or both – are not the enemy. They need love, support, and the occasional hug just as much as anyone. After all, you really can’t get AIDS from a hug. 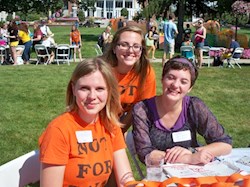 Anti-Slavery International has a variety of bucket-list worthy actives you can sign up for, like skydiving and parachuting.

The Polaris Project has released the 2017 Human Trafficking Hotline Statistics for the United States. Review and share to bring awareness to your community.