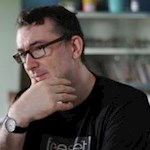 In 1999, my wife and I left New Zealand to move to Kolkata with a very broad goal: to help the poor and the needy. After naively leasing an apartment right beside Sonagacchi—the largest red light area in the city— our goal became much clearer: to give women forced into prostitution by trafficking and poverty the choice of freedom. This was the beginning of Freeset; a self-sustaining fair trade business offering employment to women who are trapped in Kolkata's sex trade.